Sommelier, entrepreneur, and showman André Hueston Mack was recently interviewed on Voices, a weekly show on Italian Wine Podcast. The interview really cut to the heart of diversity and inclusion in the wine industry, and pointed out that making the wine industry more inclusive is a question for everybody: if there is really going be a conversation about diversity, it should be with the people who don’t look like the people being excluded. 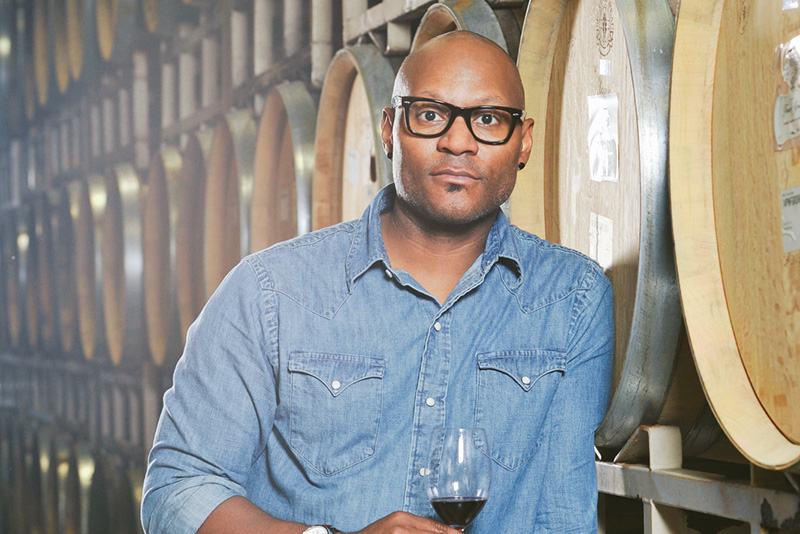 André Hueston Mack wears a lot of hats. In his formative years he worked in the financial sector; that was, until he discovered wine. He eventually won “Best Young Sommelier” in America, and went on to work for The French Laundry in California and Thomas Keller’s Per Se in New York. He branched out from there, starting his Maison Noir wine label, and his graphic design company Fraiche Cru. He is an author, a public speaker, a host for shows such as Bon Appetit on YouTube, as well as his own eponymous channel, and he even opened a chain of restaurants during the pandemic. There is little this man has not done in the food and wine industry, and he uses his fame and wisdom to mentor and educate people, something the host recently found out he is very good at. Mack’s ability to express himself and illustrate his points is very profound, especially when speaking about diversity in the wine industry, a conversation that was tackled on the Italian Wine Podcast (IWP) show Voices, a show dedicated to diversity and inclusion in the wine industry.

Mack made some very interesting points about being on the show, and it is a fine line that IWP treads because, the podcast, like so many out there, are struggling to combat the exclusivity of this industry in an effort to correct many glaring failures. In this climate, it seems imperative to give space to a show such as Voices. Making space for under-represented people in the industry who actively want to share their experiences in order to shed light on inequalities and hardships they overcame can point directly at the deficiencies of an antiquated wine industry that has not yet caught up with the times. These conversations allow guests – whether they are from the LGBTQ community, BIPOC, women, or anyone who is excluded and underserved – to share their own experiences and find solidarity with others who have experienced the same things, while in turn leading as role models, spot-lighting accomplishments, educating and cultivating understanding and change within the industry at large.

Excluded should be the operative word here since – at the same time – there is a flaw with this logic and Mack points this out. He speaks about how a show such as Voices can put under-represented people into a box, which can minimize their accomplishments by narrowly focusing simply on diversity and inclusion – implying the only reason he was asked to be a guest on the show was because of the color of his skin and not on the merits of his achievements. Mack goes on to speak about how this perception places the burden of diversity squarely on the shoulders of the guest rather than the entire industry at large.

This is a valid point, and in concurrence with Mack’s assessment, while the mode in which diversity is being tackled can be part of the problem, it can also foster a solution. The solution he alludes to is genuine recognition without the lens of race or gender and the end of highlighting the achievements of under-represented people only against the backdrop of diversity and equality. It serves no one to place the recognition of success within the confines of a space specifically designed to highlight the inequalities, rather than highlighting the individual victories in the same space as those who have privilege. Mack notes that making the wine industry more inclusive is not just a question for people who look like him, it’s a question for everybody and if there is really going to be a conversation about diversity, it should be with the people who don’t look like the people being excluded.

However, with this said, this begs the question: by doing what is suggested, could this not sweep the issue under the carpet in the long term? Could the subtle message be lost by a machine that is not yet 100% committed to acknowledging the failings of its imperfect system? In principle, completely removing the constructed space and just highlighting the individual victories without the backstory of personal hardships caused by discrimination seems correct. However, the notion also strikes as having a sense of idealism attached to it, since only in a perfect world might this be a plausible means of bringing real, lasting and sweeping change.

These points are crucial to the entire movement. Once again, the looming question was: how can this be actioned? It is one thing to be struck by such a valid argument, and another to create tangible results based on it. This is something the Italian Wine Podcast is still thinking about, and they hope to find satisfactory answers moving forward. For now, the show and the host are just grateful to have been part of a “real” conversation about something that matters, and to have learned through such a teachable moment.